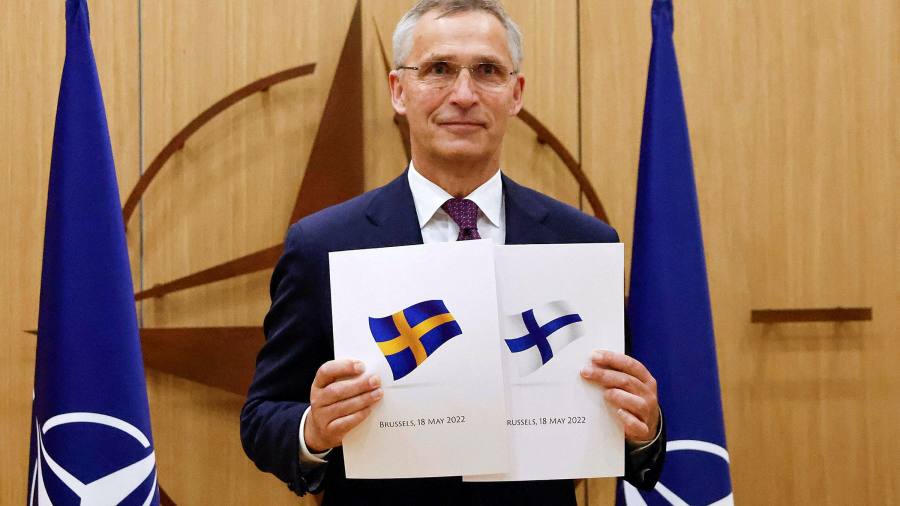 Turkey has blocked Nato’s initial decision to process requests by Finland and Sweden to join the military alliance, throwing into doubt the hopes for a quick accession of the two Nordic countries.

Nato ambassadors met on Wednesday with the aim of opening accession talks on the same day that Finland and Sweden submitted their applications but Ankara’s opposition stopped any vote, according to a person with direct knowledge of the matter.

The postponement raises doubt that Nato will be able to approve the first stage of Finland’s and Sweden’s applications within one or two weeks, as secretary-general Jens Stoltenberg indicated. It also sets the stage for several days of intense diplomacy between the US, Turkey, Finland and Sweden over the issue.

All 30 existing members of Nato have to ratify Finland’s and Sweden’s applications but that process only starts once the defence alliance issues an accession protocol and formally invites the two countries to join.

Nato declined to comment, other than to repeat Stoltenberg’s comments that “the security interest of all allies have to be taken into account [and] we are determined to work through all issues and reach a rapid conclusion”.

Speaking in parliament on Wednesday, Turkish president Recep Tayyip Erdoğan attacked western allies for failing to respect Ankara’s “sensitivity” on terrorism and accused the latest Nato applicants of refusing to extradite 30 people accused of terrorism-related charges in his country.

“We asked for 30 terrorists. They said: ‘we are not giving them’,” he said in a speech to parliament. “You won’t hand over terrorists but you want to join Nato. We cannot say yes to a security organisation that is devoid of security.”

Erdoğan, who has the power to veto their admission to Nato, said that Nato members should “understand, respect and support” Turkey’s sensitivities about these groups, but added: “None of our allies has shown the respect that we expected to our sensitivity.”

The momentous decision by Helsinki and Stockholm to pursue membership of the alliance comes after Vladimir Putin’s invasion of Ukraine, a non-Nato member that shares a border with Russia, upturned decades of security thinking in the two Nordic countries.

But Erdoğan’s opposition to their admission cast a shadow over what Nato leaders sought to cast as a historic moment for the alliance.

“This is a good day at a critical moment for our security,” Stoltenberg said on Wednesday as the Finnish and Swedish ambassadors handed in their requests at a ceremony at Nato’s headquarters in Brussels.

Stoltenberg pledged that Nato was “determined to work through all issues and reach rapid conclusions”, adding: “All allies agree on the importance of Nato enlargement. We all agree that we must stand together, and we all agree that this is a historic moment that we all must seize.”

Finland’s president Sauli Niinistö and Sweden’s prime minister Magdalena Andersson will visit US president Joe Biden on Thursday in an attempt to win his backing for rapid ratification and attempt to overcome the Turkish opposition. Turkey’s foreign minister, Mevlüt Çavuşoğlu, will meet US secretary of state Antony Blinken in New York on Wednesday.

Niinistö said: “If we have a quick process there, it helps the whole process and timetable.”

Turkey, a Nato member since 1952, is aggrieved by what it sees as Sweden’s failure to crack down on members of the Kurdistan Workers’ party (PKK), a militia that has waged an armed struggle against the Turkish state since the 1980s. It has also accused Stockholm of harbouring exiled members of the Gulen movement, a secretive Islamic sect that Ankara blames for a violent coup attempt that rocked Turkey in 2016.

Turkey’s pro-government newspaper Sabah on Wednesday set out a list of what it said were Ankara’s 10 demands of the Nordic countries. They included a demand to limit contacts with and financing of PKK and its affiliate in Syria, as well as a clampdown on Stockholm-based media linked to Gulen.

Finland and Sweden have been eager to gain security assurances, with the UK, Norway, Denmark and Iceland agreeing to come to their aid if they were attacked before becoming members of Nato and being subject to its collective defence pledge.

Niinistö said during a state visit to Sweden on Tuesday that the countries had been encouraged by the mild reaction by Putin and his foreign minister Sergei Lavrov to their Nato applications, with both Russian officials appearing to suggest Moscow would tolerate Finland and Sweden joining the alliance.

“Maybe Russia doesn’t want to tell its people that we have new problems,” said Niinistö.

Finnish and Swedish membership of the alliance would more than double Nato’s borders with Russia, but would make it easier for it to defend the three Baltic states, its most vulnerable point.

The Baltic countries have welcomed the membership requests, but stressed that Nato needed to agree to increase their own security at a Madrid summit in June.