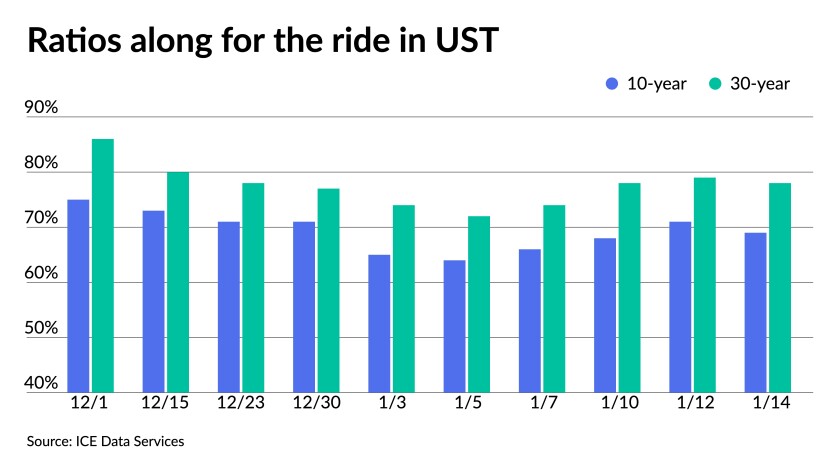 Municipals ended the week steady to slightly weaker in spots, even as U.S. Treasuries sold off and equities ended mixed on inflation concerns and more hawkish Fed speak.

Municipal yields have risen in response to Treasuries, but were mostly unmoved by Friday’s selloff, again lagging taxable counterparts as munis are wont to do on a Friday ahead of a holiday. Municipal triple-A benchmarks were little changed to one to two basis point cuts while the UST 5-year and 10-year hit new highs and the long end lost up to eight basis points.

The new issue calendar grows to $7.12 billion for the holiday-shortened week, with $5.783 billion of negotiated deals and $1.332 billion of competitive loans. The largest deal of the week comes from the New York City Transitional Finance Authority with $950 million of exempts and $250 million of taxables with other large notable deals scheduled from the BBB-rated New Jersey Transportation Trust Fund Authority, the Metropolitan Washington Airports Authority, Texas PSF school deals and a few large corporate CUSIP healthcare deals.

After a rocky start to the year, rates appear to have stabilized for now, but inflation breakevens have continued to decline, according to Barclays PLC.

Barclays strategists Mikhail Foux, Clare Pickering and Mayur Patel said as muni ratios have risen, supply has begun to ramp up, and fund flows have fallen, more volatility may ensue, which they see as an opportunity.

The front end of the tax-exempt yield curve has underperformed as a result of a spike in rate volatility and market recognition that a hiking cycle is on the horizon.

“Going into 2022, we have been especially cautious on the five-year part of the curve due to its richness and vulnerability to rate hikes, and it has finally started adjusting this week, with five-year ratios moving higher, and we might see further underperformance later in the year, with our year-end target of 60%,” they said.

The 5s10s muni curve is presently at its flattest position in over two years as a result of this week’s move, but Barclays expects it to flatten significantly further in the coming weeks, perhaps approaching its pre-pandemic lows from the summer of 2019.

They would ordinarily advocate longer-dated municipal securities as the Fed’s rate hike cycle approaches, as yield curves tend to flatten once the Fed begins raising rates. However, they are concerned about rate volatility spilling over into the municipal market, which would likely have a big impact on the long end.

The optimum risk-reward for investors remains in the belly of the curve at this time, they said.

They said this week’s trading activity has been rather subdued mainly because lower supply. The Bond Buyer’s 30-day visible supply sits at $10.56 billion while net negative supply is at $12.996 billion, per Bloomberg data.

“With issuance expected to ramp up in the coming weeks, and muni flows finally responding to rate volatility, activity will likely start picking up again,” they said. “Although the market environment might remain challenging, investors will likely find some attractive opportunities in the near future.”

Treasuries and equities sold off.

Economy
Data released Friday were termed “disappointing” by analysts, as inflation and the Omicron variant took their toll on consumers.

“Our argument that consumers will be resilient in the face of the Omicron variant took a few body blows,” Wells Fargo Securities Senior Economist Tim Quinlan and Economic Analyst Sara Cotsakis said. They had contended that each new COVID variant fazed consumers less than previous waves, but Omicron’s widespread infections are “hard to ignore.”

“Still, we suspect that Omicron is more of a boogeyman that makes for easy explanations,” they said. “Our take is that inflation is the more warranted concern with prices rising the fastest pace in nearly 40 years.”

“The drop was even larger after adjusting for the 0.5% advance in inflation during the month,” said Grant Thornton Chief Economist Diane Swonk. “The drop in spending overall was the largest monthly pullback since February 2021, which occurred as hospitalizations surged last winter. That bodes poorly for January and underscores the risk of a hard stop or contraction in growth during the first quarter.”

The impact of inflation is “evidenced by the broad-based December slump in retail sales, in which 10 of 13 major categories experienced a decline in sales over the month,” he said. But, Levy added, the Omicron impact is also seen.

“While the Delta and Omicron variants certainly contributed to this downward shift, the decline was also due to an escalating inflation rate,” said Richard Curtin, the survey’s chief economist.

Quinlan and Cotsakis expect consumer spending will be above-trend in 2022, although the consumer sentiment report notes “prices are certainly weighing on consumers’ mindsets.” They expect “confidence will likely be shaken in the next couple of months amid these lingering risks.” While Omicron “will disrupt activity,” they don’t expect it to be the headwind to consumption that the Delta variant was.

“For now, inflation is the bigger danger to the consumer outlook,” they said.

Also released Friday, industrial production fell 0.1% and capacity utilization dipped 0.1-point to 76.5%. economists expected a 0.3% rise in production and a 77.0% capacity use level.

Raskin previously served as a Fed governor from October 2010 through March 2014, she also serves as deputy Treasury Secretary.

Cook, a professor of Economics and International Relations at Michigan State University, would be the first Black woman to serve as governor, if confirmed.

Jefferson is vice president for academic affairs and dean of faculty and the Paul B. Freeland professor of economics at Davidson College.

Raskin’s nomination will be challenged by Republicans, with Sen. Pat Toomey of Pennsylvania, the top Republican on the Banking Committee, on record that he has “serious concerns” about Raskin and extending the Fed’s mandate beyond price stability and maximum employment.

Cook and Jefferson may have dovish tendencies, said Peter Ireland, an economics professor at Boston College and member of the Shadow Open Market Committee, but “their policy decisions won’t deviate too much from the consensus shaped by Chair Powell,” given persistently high inflation being the major economic risk to the economy now.

“Raskin has views on bank and financial regulation that are very different from Randal Quarles,” whom she would replace, Ireland said. “Assuming she’s confirmed, it’s on the regulatory front that we’re likely to see the biggest changes.”

Here’s what the Federal Reserve’s 25 basis point interest rate hike means for your money
Aave deploys v3 on Ethereum after 10 months of testing on other networks
Rumor has it that Dogecoin could shift to proof-of-stake — What does that mean for miners?
Ethereum to Reach Peak of $2,474 Per Token in 2023, Finder’s Survey of Crypto and Fintech Experts Reveals
Adani Enterprises calls off $2.4bn share sale